My Favorite Book Taught Me How to Live a Happier Life, Unapologetically

Growing up, I didn't have much to rely on except for my imagination. I lived in an area where it wasn't particularly safe to play outside all of the time. We didn't have cable until I was in my mid-teens, so I was easily drawn to books for entertainment purposes.

I found books that related to my childhood or were similar to parts of my culture. I've read many books during my childhood and teenage years, but there was one that stood out and, at 24-years-old, I find myself revisiting it once again. 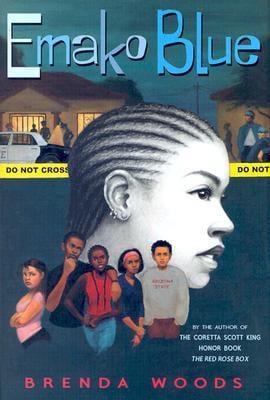 There will never be a book that relates to my life as much as Emako Blue.

This book, written by Brenda Woods, convinced me to follow my dreams of writing and succeeding in the media industry. It also channeled my fear of living in a violence-filled neighborhood. Emako Blue was supposed to be a worldwide superstar, like Beyoncé. She had the voice of an angel and wasn't afraid of standing up for herself and her friends.

She was also known for her beauty. The type of beauty that stood out whenever she walked into a room. Most importantly, Emako was Monterey's best friend. She helped Monterey grow up and find her voice in the world, even though she was only 15-years-old. Emako was also the first girl that seen past Jamal's player act" and made him soften up. She was just about to pursue her dream of becoming a singer when she was killed suddenly by a bullet meant for her criminal brother.

To say that I was scared to live my life in the city I grew up in is an understatement. I was terrified. Although I was young, I knew what was going on in my neighborhood because I watched the local news. But all of that changed after reading this book, and I understood that living in fear wasn't a life I wanted to have.

As I read through the chapters, I always thought about how each character in the book was similar to the people I knew. It was like I was reading about my own life but with more details. I was around the same age as the main character Emako and her friends, and I also had a dream that seemed "unrealistic" in my neighborhood.

When I first read the book, I was furious that Emako passed away just as she was about to prove people wrong. I wanted to know why the author, Brenda Woods, couldn't create a happy ending for this talented Black girl. Then, I realized Emako lived every second of her life fearlessly. She valued her short life and followed her passion without the fear of failing. As I began doing a little more self-examination, I noticed that I had to be fearless if I wanted to succeed and truly thrive. I slowly let go of being coy and jumped into my goals head first. Now, I can say I'm starting to see the beginning of the light of my dreams. A fearless yet cautious life is one that I've chosen to live without an ounce of fear or self-doubt.