What qualifies a woman as a badass? For Serena Williams, "(y)ou have to be confident. Someone who’s a badass is incredibly confident and unapologetically herself. And she doesn’t care what anyone else says — but in a positive, not a negative, way. It’s more like standing up for yourself and others."

InStyle called upon the record-breaking, world-renowned tennis playing, mother extraordinaire to be their cover girl for their first "Badass Issue" and she opened up to them about the game she loves, the man she loves and the child she adores.

Williams began her journey on the tennis court at the tender age of 3 and hasn’t stopped since. Now 36, she continues to serve on the courts but has entered a new phase of life with different rules: Motherhood. On September 1, 2017, Alexis Olympia Ohanian was born and changed the course of Williams’ life.

Initially, Williams could not believe she was pregnant; She shared that she had just gotten her cycle before taking a pregnancy test and hadn’t seen her husband, Alexis Ohanian, in almost four weeks. When she finally accepted the truth, she was in Australia for the Australian Open and went on to play in the tournament.

"… I was surprised when I saw the result and even more surprised when the doctor said I was seven weeks along… I had a really tough first round and an even tougher second round. I thought, 'I’m probably going to lose early. That’s OK. I have a good excuse for the first time.' I talked to the doctor, and I was like, 'Do I need to pull out? Because it’s not worth it. This is, like, my baby. Can I do anything that’ll hurt her?' She said, 'No. But just be careful in the hot weather, because that can be a problem.' I played on a day that was 104 degrees and asked for a really early time. The tournament director was like, 'You never like to go on early. In 100 years you’ve never requested 11 o’clock.' And I was like, 'Just trying something new!' I didn’t want to chance it with the baby."

Even after the worry and concern, Williams went on to win the tournament earning her 23rd Grand Slam title, all while two months pregnant. So what did the champion do post-winning? She went home and eventually welcomed Alexis Olympia with her husband, reddit founder, Alexis Ohanian.

The Ohanian family is looking to expand, but not at this present moment. WIlliams shared that her pregnancy was pretty easy for the most part, but once it was time to give birth, the tables turned. According to InStyle, "Williams had to undergo an emergency C-section when her heart rate dropped during contractions. After she gave birth, she suffered a pulmonary embolism, a blood clot in an artery in the lungs, which required immediate surgery and six weeks of bed rest."

Williams commitment to her tennis life has not stopped since giving birth but she makes sure she is not away from her precious baby girl for more than a day. A typical day for her now goes a little something like this:

"I wake up at either 2 a.m. or 4 a.m. to feed Olympia… Yes 9she is still breastfeeding), and on top of that, I’m in the locker room pumping before a match because my boobs are so big. When I pump, they go down a size or two and I go out and play. It’s crazy. So I feed her, and then she snuggles with me, which is the best part of my day. Then we play, and after that I sneak away to practice, usually around 8 a.m. The only rule I have at practice is to be done at 1 p.m., because as much as I love tennis, I need to be with her. I want to put her above everything else I’m doing, so I take calls when she naps. I usually bathe her every night. We sing the “Rubber Ducky” song, and then I ask her if she wants the express wax or the deluxe. Express is when I rub coconut oil on really fast and then I put her diaper on. Deluxe is when I do it a little slower and give her a little massage. It’s so cute. She’s in bed by 7:30 at the latest."

When asked about her husband and their demanding schedules, Williams reassured that even though they travel often, especially Alexis, they do not go long without seeing one another. Their love story began as a friendship and Williams’ interest in "his world."

"I had this sense, like, 'I’m going to marry this guy, but I’m not ready yet, but I know I’m going to marry this guy.' I didn’t know his world at all, but I’ve always been tech-savvy. I had a few investments before I met him, and I wanted to know more. So we started talking, just as friends. Just casually chatting. I was getting hot when he was talking about it all (laughs). So after that we just continued talking, and then, I don’t know — I love his world." 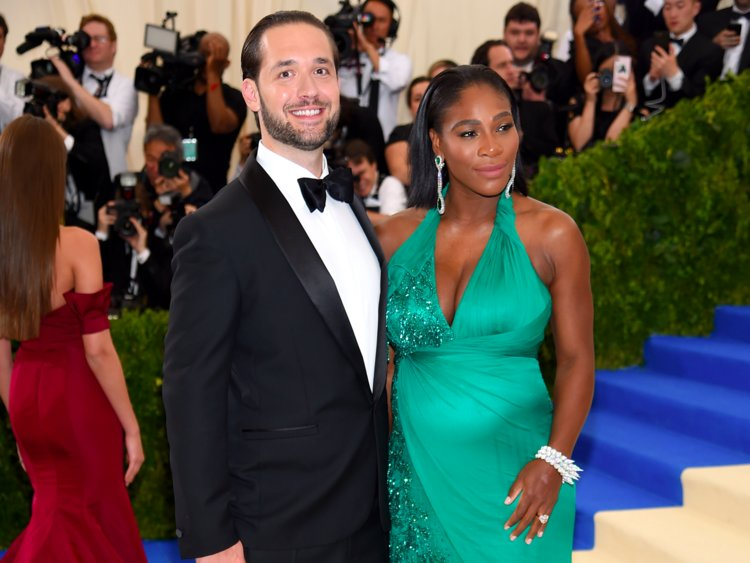 And speaking of being interested and invited into interesting worlds, the Ohanian family recently attended the historic royal wedding of Prince Harry and Meghan Markle. Williams, who has known Meghan for years, said it was so good to see her friend happy and found joy in sharing the moment on her social media pages. She also chose to be chic and comfortable, a combination we all love.

"I worked with (Valentino designer) Pierpaolo Piccioli (for my reception look), and I had a great time. The first thing he showed me, I was like, 'This is it. I don’t need anything else.' It was such a big hit. I was supposed to wear heels originally, and I’m thinking, 'C’mon, Serena — reception. Heels or shoes? Heels or shoes?' I decided to go with the shoes (laughs])"

Circling back to what it is to be a badass woman, Williams said she believes women like Beyoncé, Rihanna and Kate Middleton all encompass the elements of a woman of that caliber. When reflecting on her on badass moments, she recalled returning to Indian Wells for the first time after being booed in 2001 with her sister Venus over unfounded accusations that their father was fixing matches.

"I think going back to Indian Wells. For me, that was really badass… I was so nervous. I remember before I went back, I was thinking, 'I don’t know what I’m doing. I don’t want to get booed again.' To walk out on that court again was really badass, to just face up to it. I was literally afraid. I was a teenager (when it happened). It really affected me, and I didn’t realize how much until I had to go back."

Williams is back on the courts and still coming for all she deserves but she recognizes her growth as a player is still a very physical and mental journey. She may not be the athlete she was before giving birth, but she’s slowly but surely working her way back.

"… I feel pressure to be Serena. But these days I keep telling myself I don’t have to be anything. This is for me."

Watch some behind the scenes moments with Williams here: