Tessa Thompson Discusses Her Roles, Race And Relationships On This Month's Net-a-Porter Cover

Tessa Thompson is gracing Net-a-Porter’s cover, and we're absolutely living for all of the photos and the wonderful interview. Tessa discusses her most recent roles, her relationship with Janelle Monae, her high school’s "racial harmony group" and her head-turning style!

Tessa Thompson recently wrapped Creed II and was still donning her pink manicure to prove it during her interview with Net-a-Porter. While the pink acrylics aren’t necessarily Thompson’s go-to, she enjoyed having something that’s very unlike her to transform and anchor her into her character. "Bianca’s fairly close to me. She enjoys solitude, has dreams of making a mark, and she’s somebody that is cautious with her heart," shared Thompson.

Creed II isn’t the only thing that she’s worked on, she’s also made appearances on Westworld as a villain named Charlotte Hale, as well as on Thor: Ragnarok as Valkyrie. Her most recent film, Sorry To Bother You, focuses on race and is set in Oakland, California, where her co-star LaKeith Stanfield plays Cassius Green, a black man who is told that to succeed at his job he needs to make use of his "white voice."

"Seeing black people in narratives of magical realism is something I’ve really been longing for," stated Thompson. 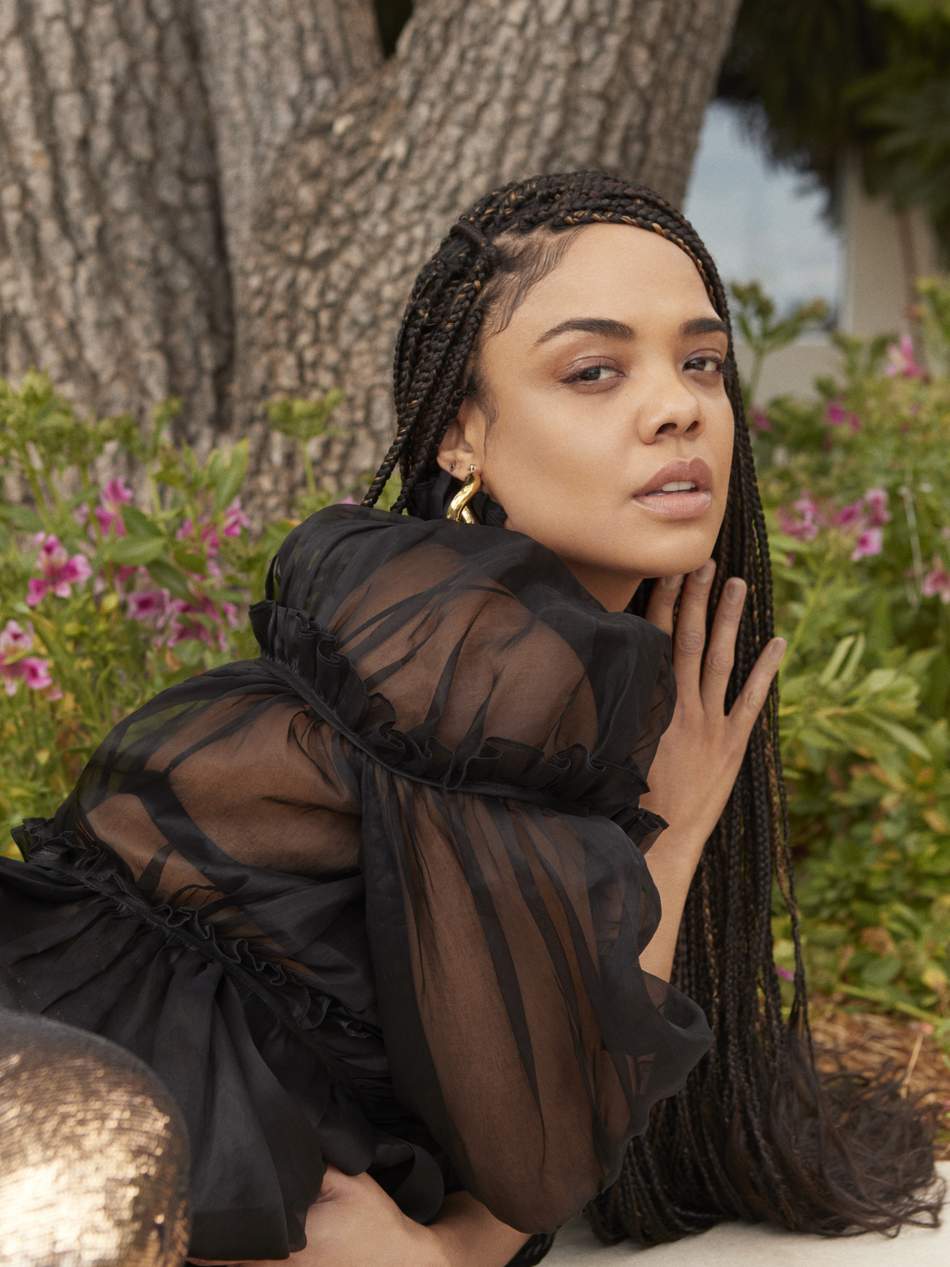 Thompson’s acting isn’t the only thing that’s had her in the spotlight recently — her relationship with Janelle Monae has also made for talk about the actress. Thompson was a big part of Monae’s visuals for her latest creation, Dirty Computer. Who can forget Thompson popping out of Monae’s vagina pants in "Pynk" or her dancing at the club in "Make Me Feel?" Definitely not us!

When the questions about her relationship with Janelle Monae came about, Thompson answered thoughtfully:

"It’s tricky, because Janelle and I are just really private people and we’re both trying to navigate how you reconcile wanting to have that privacy and space, and also wanting to use your platform and influence."

"We love each other deeply, we’re so close, we vibrate on the same frequency. If people want to speculate about what we are, that’s okay. It doesn’t bother me," she continued. Thompson also spoke about her Mexican and Panamanian roots with Net-a-Porter. As the daughter of a black Panamanian musician and a half-Mexican, half-white mother, she endured racism and bullying for sticking out in the schools she would attend. In high school, however, she formed a "racial harmony group" which was a regular sleepover of about 20 students from each ethnic group in the school.

In her racial harmony group, she attended the first year as a black student and her second as a Mexican student.

"I guess I’ve always been conscious of the ways in which identity is a creation, I could tuck all my hair up into a cap, and suddenly people would treat me differently because they’d assume I was a boy. I think maybe that’s what attracted me to acting. I would look at people and wonder how they made themselves," shared the Los Angeles native. When it comes to her style, we’ve seen Thompson dressed in exciting outfits from brands like Roksanda, Altuzarra and Mary Katrantzou. While most may not necessarily be excited to play dress up for events, Tessa thoroughly enjoys it. She’s also been featured in Rodarte’s FW18 lookbook, along with people like Kirsten Dunst and Grimes.

She feels the presence of black women is important, and she’s glad brands are noticing the impact it has to have black women gracing their lookbooks.

"It’s really easy to write off these spaces as being frivolous," she adds, "but I don’t think they are, actually. I think they’re significant."