Recently, Yara Shahidi sat down with Tory Burch to discuss all things voting, podcasts and being a role model for other teens. The two met at Lincoln Center in New York City on behalf of Tory Burch Foundation’s first "Embrace Ambition Summit: Confronting Stereotypes and Creating New Norms." 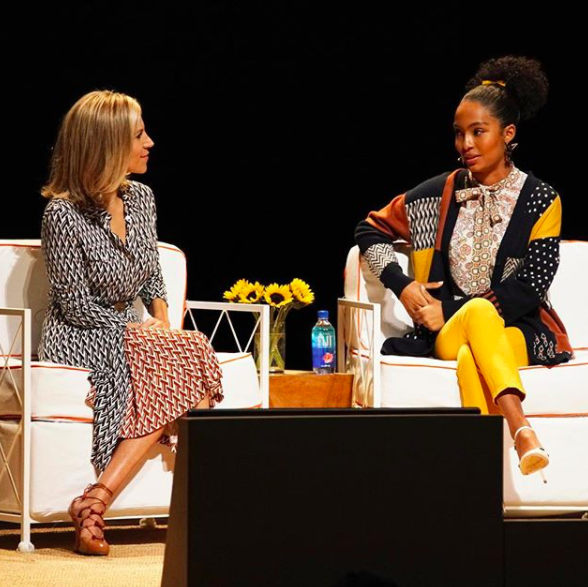 According to WWD, Shahidi shared that she is set to begin her freshman year at Harvard in September, where she plans on studying history and African-American studies. She also shared that while she was expecting to "just go to class and go to sleep," working on Grown-ish opened her eyes to the fact that college might not be so simple. Nonetheless, she’s looking forward to being in an academic community as it’s nothing like any environment she’s been in before.

The Grown-ish star said that a top priority in her life has always been education, despite her blossoming career.

"My love of history really contextualized where I am in this universe," she said.

Shahidi has been busy promoting her platform, Eighteen x 18, on social media to encourage her peers to vote in the upcoming midterm election and to raise the percentage of voters since the last election. She noted that the platform focuses on first-time voters and she stresses the importance of voting, especially since politics aren’t always marketed to the younger generations.

"It freaks me out being a role model, at the same time, it’s cool, but if anything I’m doing helps inspire, thanks. As outspoken as I am, I’m inspired by the fact that I have so many peers to turn to who are just as outspoken and are just as vocal," Shahidi told Burch. However, she does believe that intergenerational relationships are extremely important and that social media is a tool that’s changed our entire world.

The chat ended with Burch asking Shahidi about her favorite podcasts and books, to which she responded: "'Code Switch' by NPR is fantastic, 'Pod Saves America,' 'Hidden Brain’ is great. There are so many good ones. Oprah's podcast, 'The Nod,' 'Planet Money,'" and as for books, she named Giovanni’s Room by James Baldwin, The Bluest Eye by Toni Morrison and Sing, Unburied, Sing by Jesmyn Ward as recent favorites.

Be sure to check out Eighteen x 18 to register to vote and learn more about the platform.
black womenblackishgrownishharvardnewssocial mediastereotypestory burchwomen empowermentwomen of coloryara shahidi