Miami Swim Week is a time for those within the swimwear industry to showcase their work, promote swimwear and enjoy time in the sun. But this year one Brazilian designer, Silvia Ulson, is being accused of replicating the style of a Nigerian designer’s collection from 2017. Ulson’s piece were seen on the Miami Swim Week stage during her runway show on July 21st. It did not take long for representatives from BFYNE, created by Buki Ade, to recognize the resemblance of the swimsuits to their own Spring/Summer 2017 "Sahara" Collection.

"It comes to us as a surprise as to how another designer is allowed to showcase replicas, and claiming it as her original work during swim week," BFYNE media director John Adele said to FashionWeekOnline. 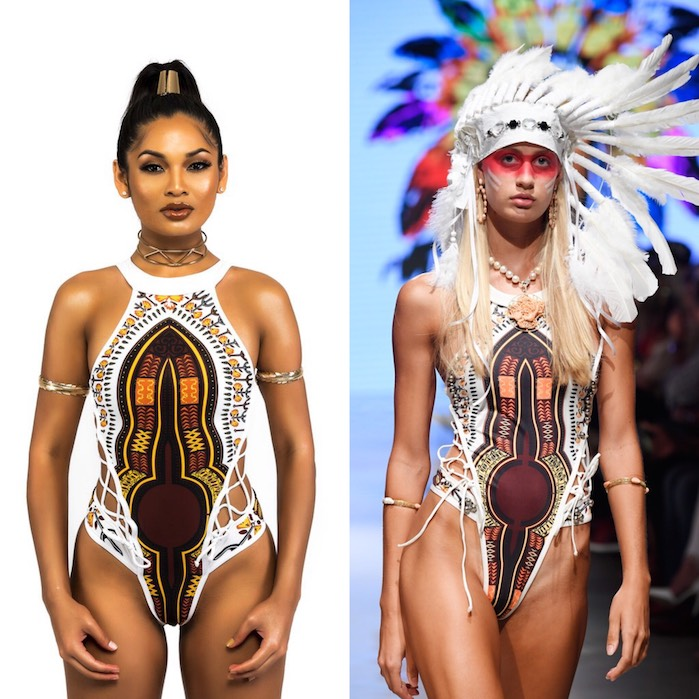 The models in the show were also seen wearing feathered headdresses, which one rep from BFYNE told The Huffington Post were used to "(deceive) people to think the print and design were Native American-inspired." Ulson spoke to FashionWeekOnline to address the claim against her regarding  plagiarism and she shared her inspiration this year was "Native American Brazilian."

"I went to a tribe and spent two days there. That’s what we used for the headdresses… upon returning from there, I made the black-and-white bikinis that were also shown, and thought it would be interesting to have some bikinis with prints mixing the indigenous paintings that they paint on their body. For the Brazilian Indians, each painting has a meaning."

What is interesting about Ulson’s response is she admitted to reaching out to another designer to assist her in creating the bikinis in question since she doesn’t sell swimwear regularly and was participating in Swim Week for fun.

"I looked for a person here in Brazil who creates in this medium. I spoke with this person called Fernando: he came personally to my store and told me that some days he would come back with some samples. I thanked him and I was waiting for this gentleman to come back… At first I did not like them, but he told me they were great, and that it would be very important to have these prints so that everything was not black and white. I paid for his creation and for producing each sample. I was grateful and added those bikinis he made for me in the collection I showed at the show in Miami." 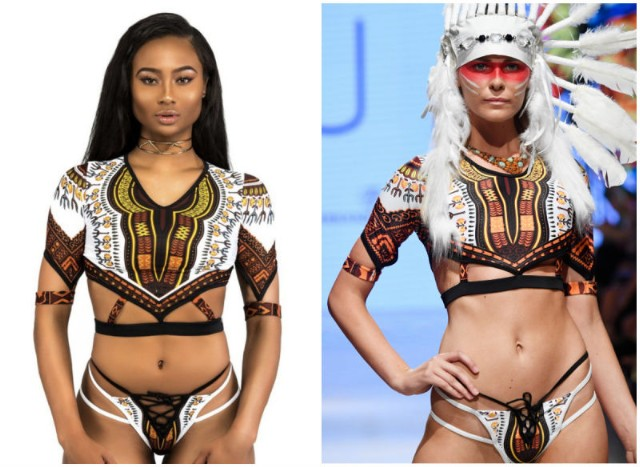 PHOTO: Vibe [BFYNE on the left and Ulson on the right]

Ulson also went on the say she never would have imagined the designs were copies and would never pass off designs in the Miami show from a brand that already existed. While she maintains she was duped, it seems she also didn’t recognize the difference between dashiki print and "Native American indigenous prints." Since the accusations have surfaced, Ulson has taken down a few posts in relation to the controversy.

The frustrations of BFYNE representatives, such as Adele, is housed in the fact that they worked diligently to create something that was not only unique but represented their culture.

"That was extremely important for us to execute properly. We wanted to bring sexy to dashiki print and change the way the print was being looked at, ultimately transforming it into something no one has ever seen before," Adele told Huffington Post. "We live and breathe our culture, and we made it our mission to showcase that through our designs and the dashiki print."

Ulson tried to discredit the brand’s authenticity by claiming several online vendors sell similar bathing suits but BFYNE pointed out to FashionWeekOnline that many of the photos seen on other sites were taken from them and FashionWeekOnline shared, "... we were not able to find a record of the Ali Express listing prior to March of 2017 (when BFYNE’s collection made its debut, as recorded in Nylon and Huffington Post)." 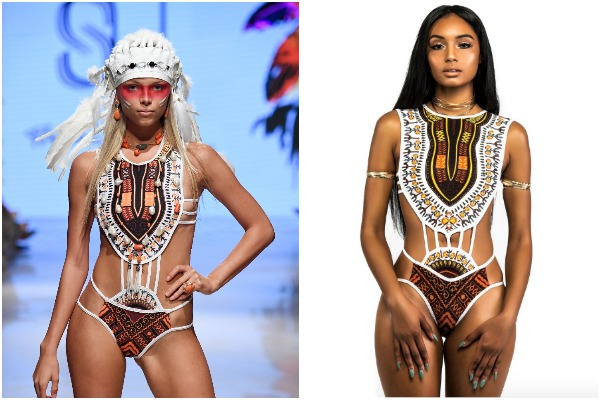 Overall, BFYNE’s frustration lies in the notion "(Ulson) got endless press for designs she didn’t design or even make" and Ulson claims "my goal was simply to put on a fun show, as I have since 2005. I paid for the patterns in question, and it was supposed to be a show of cultural pride. Instead I was sold prints that appear everywhere…." We don’t know about you, but that explanation is still a bit fishy to us. What’s you take?