THIS ROSS IS ON FIRE

by AKA Little Voice

It’s summer hiatus in TV land, but Tracee Ellis Ross is still on fire. Before the season ended, she directed her first episode of Blackish on the daunting subject of marital strife and separation, between one of TV’s most beloved Black couples. She gave an inspiring TED Talk and has been increasingly growing her activist muscle. She was one of the best guests EVER on Desus & Mero, and low-key elicited hopeful couple vibes between her and co-host Desus. Lastly, she interviewed our #ForeverFirstLady Michelle Obama at the United State Of Women Summit in May. Hear me when I say, “Tracee is amazing.” 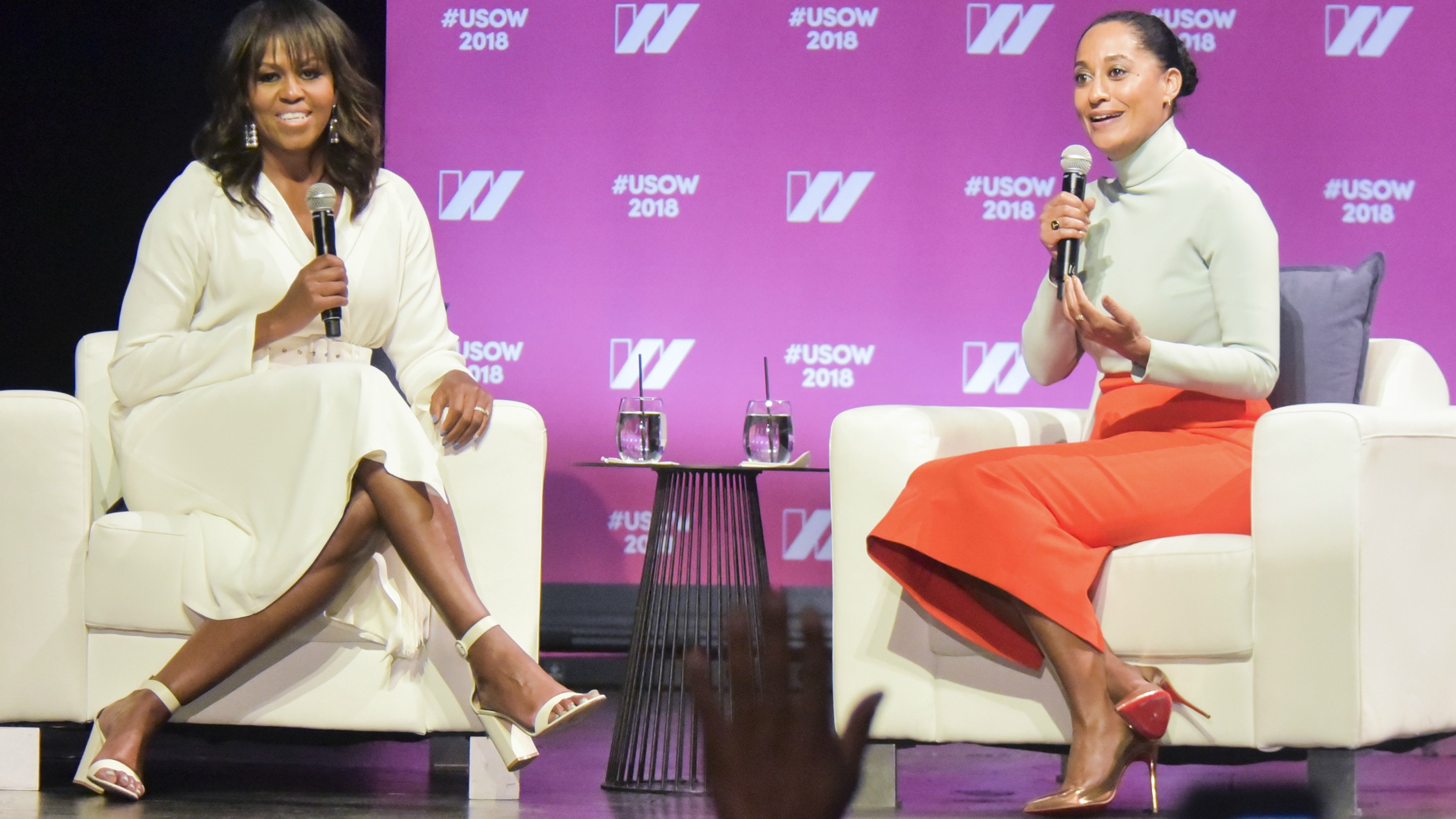 I once read a comment that Tracee was the daughter of a legendary entertainer and dismissed her fame as if it were handed to her. This was years ago when Tracee was playing small roles in Tyler Perry movies like Daddy’s Little Girls, and in music videos with Kanye. And this was after being on the MTV sketch comedy show, Lyricist Lounge, and the long-running Girlfriends sitcom playing the character I most identified with, minus the neuroses, Joan Carol Clayton.

I’ve always love Tracee’s style, her big ‘ole unapologetic hair, her silliness, and her willingness to seemingly put her whole self out there, for better or worse. That’s where my similarity to Ross ends. I’ve still got work to do in that arena, and am seriously considering some improv classes when I’m back in New York.

After Girlfriends went off the air, I would intermittently search for Ross to find out what she was up to. I watched her in the HBO film Life Support with Queen Latifah, and in the short-lived BET series Reed Between The Lines, with Malcolm Jamal Warner, which never came together for me. I saw the aim of the project, but it never fully connected. In a way, you could say that her role on Reed Between The Lines was a precursor to her current role in Blackish – the everyday life of a Black middle-class wife and mom.  In any case, I still watched and waited for Ross’s star to take off, while also foolishly waiting for a Girlfriends re-boot or movie. I found a blog of hers before they were even called blogs. It had a few videos of Ross doing some character bits. I wanted more. Fast forward to September 2012 when Tracee had a brand new blog focusing on her thoughts, style and all of the things that make her unique. I was in heaven.

Ross may come from a famous family, but she’s definitely worked hard to make it to where she is. She could have easily been the Black or racially ambiguous sidekick in the many 90s era chick flicks. However, I suspect that casting directors may not have known exactly how to position Tracee as the “friend” when she was as stylish and stunning as the main character. It’s hard to play down Tracee’s on-screen style and presence. Even if she’s playing the quirky, left of center character, she still manages to jump off the screen at you.

And then there’s that alternatively composed presence of hers that I’ve loved and long identified with. Ross seems to be a humble work in progress, whose star is just beginning to shine. As a daughter of a legendary mother, who I’ve absolutely worshipped, been inspired by – Mahogany anyone? – and had the pleasure of working for once – but that’s a story for another time –  I’ll presume that Tracee’s seen a lot of what she doesn’t want to be, and also been introduced to so many modes of thinking and being, that she’s seen the best, and possibly worst, of what life has to offer.

An actual free thinker, as evidenced by her TED Talk, when Tracee discussed women owning their fury, and men becoming of service to the women’s equality movement and #TimesUp. Ross is absolutely right about women having to stop avoiding their discomfort and fury with the feelings that surface from having their bodies and space intruded upon. As a young Black girl, I was always taught to fight back, and I do mean physically, if someone tried to bully me at school. In today’s world, people espouse non-violence, to the point that women especially are inadvertently taught to take whatever is thrown at them in order to appear likable and nice. I disagree with this approach. Knowing how to fight, whether physically, mentally or intellectually is a skill from which everyone can benefit, and knowing which one to use is an even greater skill.

TED TALK ~ “A Woman’s Fury Holds Lifetimes of Wisdom” Link to full speech in bio — This was one of the most terrifying and empowering experiences of my life. I’ve been inspired by many @TED Talks over the years, so the task of writing my material and then standing on the red dot in a room full of thought leaders was a daunting task but one I felt ready for. And to be the first black woman to ever open a TED conference was beyond humbling. I was buoyed by the courage of women. I found the space to ponder these ideas and find these words with you all. I’m so thankful to TED for this experience, and I’m excited to share it with you. #TED2018 #TEDxTracee

I’m sure Tracee wasn’t talking about physical fury, but I do believe her point was that knowing and acknowledging when a boundary has been crossed builds strength. Strength is in the muscle that makes you unafraid of your gut reaction to people who intend harm, without worrying about protecting them from your reaction before you protect yourself.

Ross is the exact kind of best friend I want. Someone to watch Wild Country with and discuss Sheela’s well-intentioned, yet ego-driven ass, over a glass of wine. I can see Tracee’s wide-eyed expression of disbelief right now at Sheela’s power-hungry moves. Or sit and dissect the genius of Tituss Burgess on this last season of Unbreakable Kimmy Schmidt. Or giggle incessantly over how people lovingly lit her up over her geriatric inspired Acne trainers. Or we could talk about our mutual crushes on Harry Connick Jr. and how we used to “shop” our mom’s closets. For now, I’m happy to have her be a bestie in my head and continue to watch her win.