Black women are known to transcend realms that attempt to keep them away. In the world of fine arts, the percentage of Black women within the field seems microscopic compared to the number of Black female artists we may have come across or even know personally.

Visual artist and painter, Tiffany LaTrice, saw this missing link for Black women in the industry and decided to make a change.

TILA Studios, an Atlanta, Georgia based co-working and community space for Black Women Artists, has created an area for these artists to feel appreciated, welcomed and empowered. Having been denied opportunities to countless galleries, agencies and MFA programs, LaTrice recognized the necessity for a space such as this.

Despite knowing she had immense talent and being awarded multiple accolades, LaTrice told HuffPost, she struggled to get her art into these institutions.

“I was selling my work for thousands of dollars online. And so, I was so confused,” LaTrice told HuffPost. “I thought, OK, I have this talent. I’ve been awarded numerous accolades for my artwork, but I can’t get into these institutions that are obviously, mostly ran by white women … so they don’t know my story or my narrative and my artwork,” – LaTrice, in a interview with Huffington Post.

Although TILA Studios launched in 2016, LaTrice recently told Forbes she feels as though she was creating it her entire life. She proceeded to say, in an exclusive interview with Forbes:

“It is something that I was born to do, and that vision was amplified during my studies at Sarah Lawrence College (SLC). At SLC, I was enrolled in the Women’s History Master’s program. The program was instrumental in my learning about the power of collective sisterhood, collaboration, and activism. […] In 2014, I left everything behind in New York City to move to Georgia to become a full-time artist. It was during moments of isolation and solitude that I had with a paintbrush, that I knew art and creating were my life-long career.” – LaTrice, in an exclusive interview with Forbes.

You thought there were only 4%… There’s More Than Four Black Women Artist in the arts industry, making the work and making moves that pushes the canon forward. There are more stories, more experiences and more women who make up beyond 4% of the industry and we are going share them with you. As we near the end of #TheRoadToArtBasel, you will get to know many women who are shaking things up. All that we ask is that you give her flowers 💐 when you see her. #AboveFour

Earlier this year, TILA Studios launched a More Than Four campaign as a lead-up to Art Basel, a premier art-showcase known as a “driving force in supporting the role galleries play in nurturing the careers of artists.”

The purpose of the More Than Four's posts is to combat the idea that only 4% of artists within in the fine arts field are Black women. They used their platform to highlight women who deserve to be celebrated in their field.

The campaign also tied into TILA Studios' inaugural Garden Fellows Program, providing an opportunity for talented artists to go to Art Basel in Miami and to bring their innate talent to a grand stage.

Our forever #WCW ➖ The 2018 Garden Fellows: Angela, Grace, Evelyn, Jasmine, Ayanna, Ebony, Sachi, Ariel, Christa and Shon. Give them flowers when you see them. 💐 ➖ While the studio has been quiet, TILA is going full speed into 2019. Are you ready? 💐✨ #TilaWillGoWithYou

“I wanted the inaugural Garden Fellows to be exposed to opportunities that expand their work. I wanted them to be in direct connection with their role models, mentors and have candid conversations with their peers. […] if I can give 10 Black female artists, across mediums and generations an opportunity to show up and claim space, how powerful would that be in shifting the narrative. […]  I also wanted them to see themselves and connect with other established artists and curators that are doing the work on that level. I believe that is empowering and affirming.  It was so inspiring to me to see that once we show up in numbers and empower each other, we can start to create change,” LaTrice exclusively shared with Forbes.

While the studio is fairly new, LaTrice and her team have been making great strides and even received special recognition from Florida Congresswoman Frederica S. Wilson at their EmpowerHER Brunch earlier this month. 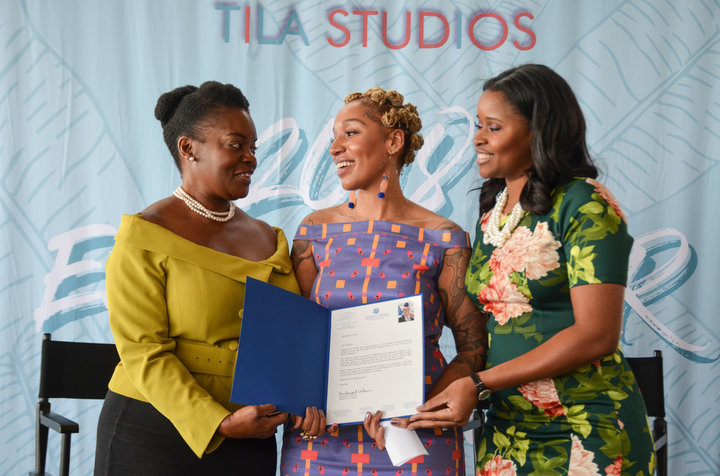 As TILA Studio preps for the New Year, on a recent Instagram post they said, “… 2019 is all about history-making moves, watering the art community here in Atlanta and giving more flowers to Black Woman Artist” and we cannot wait to see what’s to come!